Shameless testimonial propaganda or harmless advertising?  Testimonial propaganda is using the endorsement or testimony of an individual or organization to enhance or influence the credibility of the thing being endorsed. In this case the Pentagon is using the credibility of the the NFL to endorse military service and service people through what looks to be an authentic act of appreciation.

The recently exposed news that this act was purchased by the Pentagon and teams paid millions of dollars to conduct this carefully constructed stagecraft is particularly disconcerting. Authentic acts of heart-felt tribute have meaning to the all the participants involved. Paid advertisements made to look like heart-felt gestures of appreciation and endorsement are nothing less than shameless propaganda.

As the title of a Salon article suggests, the military is buying patriotism; spending extravagantly on propaganda during the very time period that they were exposed as drastically short-changing veterans in need of medical care at the VA.

Propaganda that is needed, by the way, to prop up an institution whose goal is no longer to defend America but to engage in countless unconstitutional conflicts in the service of global corporate masters whose true agendas are hidden. Our military has become a mercenary fighting force paid for by the American taxpayer. Ceremonious half-time celebrations by the NFL help support the illusion of patriotism and the America we once knew.

The military is buying patriotism: A Memorial Day nightmare about Pentagon budgets and veterans used as a sideshow 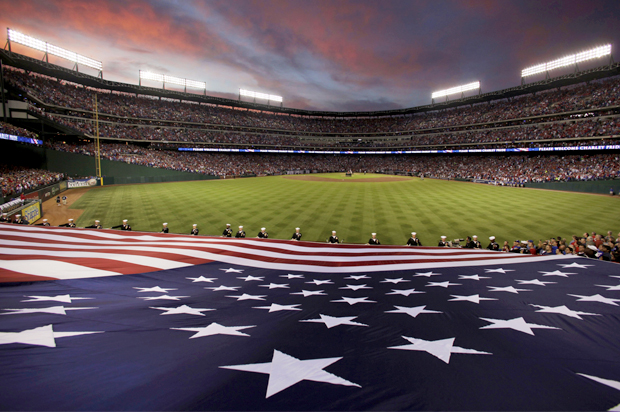 The New Jersey Star-Ledger reports that from 2011 to 2014, the Department of Defense paid 14 NFL teams a total $5.4 million, while the National Guard paid 11 teams $5.3 million, to “honor America’s heroes” before football games, and during halftime shows. Not every NFL ceremony was part of the pay to play scam, but many of those maudlin, red, white and blue salutes to the soldiers, Marines, airmen and sailors, complete with jet plane fly overs, marching bands and giant banners were no different than the advertisements for Coca-Cola or Viagra.

Regardless of how one feels about lionizing the military, it is distasteful, and indicative of America’s cultural collapse that the NFL jumps at the opportunity to take millions of taxpayer dollars to exploit a genuine affection and gratitude many Americans feel for veterans to rehabilitate its own image, present itself as not a money printing machine destroying the brains of its players, but a company of patriotic virtue. Sincerity and authenticity no longer exist in America, because everything from the cheaply vulgar to the seemingly sacred, wears a price tag. Capitalism triumphs over culture when it sublimates everything into commerce, and when it morphs every interaction into a transaction.

When the Pentagon enlists the NFL in a propaganda campaign to transform America into Sparta, it equivocates war with football.

Gore Vidal once taught a political science course in a single sentence: “The only subject that a mature people in a so-called republic should be interested in is who collects what money, to spend on what, for whom.”

America is no longer a republic in political procedure nor is it truly democratic in cultural practice. It is a militarized economy and a garrison state. Fifty five percent of discretionary spending from the federal government goes to the military.  Read more…