The indoctrinator-in-chief has been on a literal rampage over the past month suggesting that climate change is the cause of..well nearly everything. One wonders how he sleeps at night worrying about such lofty and pressing issues.

As the coast guard article points out Obama has been omnipresent as a climate change apostle this month suggesting that it leads to global instability, poverty, environmental devastation, harm to animals, risks to national security, and is an insidious danger to general health. He is actually beginning to sound like Chicken Little- The sky is surely falling tomorrow if we don’t agree to the globalist climate change agenda. See  bolded “Chicken Little” passage. While most American’s yawn over “climate change”  and would rather discuss the bizarre Kardashian world, the indoctrinator-in-chief has done his best to whip the world up-or at least the brain-dead masses-into a frenzied panic.

Yesterday Obama suggested that “we weave climate change into science and social studies lessons because kids instinctively understand the importance of environment, impact on animals, health”, when asked how teachers should approach discussing climate change in a classroom setting. Of course no one wants free-thinkers or gasp, “climate skeptics” slipping through the cracks of the educational system so the children need to be bombarded from every academic discipline. Leave no stone unturned in the holy mission to indoctrinate children with fear mongering messages about a non-existent threat.

The origins of the “settled science number (97% of experts agree)  that he continually repeats is examined below. Remember of course that repetition is essential to all phases of indoctrination. All authorities should seem to be in full agreement so that dissenters  can be castigated and mocked.

Ninety-seven percent of scientists agree: Climate change is real, man-made and dangerous. President Obama tweeted that, and it has been repeated by countless others. It is tempting for a politician to claim that 97 percent of experts agree with you. But do they?

The paper is a treasure trove of how-not-to lessons for a graduate class on survey design and analysis: the sample was not representative, statistical tests were ignored, and the results were misinterpreted.

What was an incompetent piece of research has become a highly influential study, its many errors covered up.

The trouble does not end there. Cook has been reluctant to share his data for others to scrutinize. He has claimed that some data are protected by confidentiality agreements, even when they are not. He was claimed that some data were not collected, even when they were. The paper claims that each abstract was read by two independent readers, but they freely compared notes. Cook and Co. collected data, inspected the results, collected more data, inspected the results again, changed their data classification, collected yet more data, inspected the results once more, and changed their data classification again, before they found their magic 97 percent. People who express concern about the method have been smeared.

We would hope that the president of the United States of America does not spend time checking such trivia. That is the job of the editor of the journal, Dan Kammen of the University of California at Berkeley, who unfortunately has chosen to ignore all issues I and others raised about them. Similarly, the journal’s publisher, the Institute of Physics, and Cook’s employer, the University of Queensland, have turned a deaf ear to my concerns. What was an incompetent piece of research has become a highly influential study, its many errors covered up. 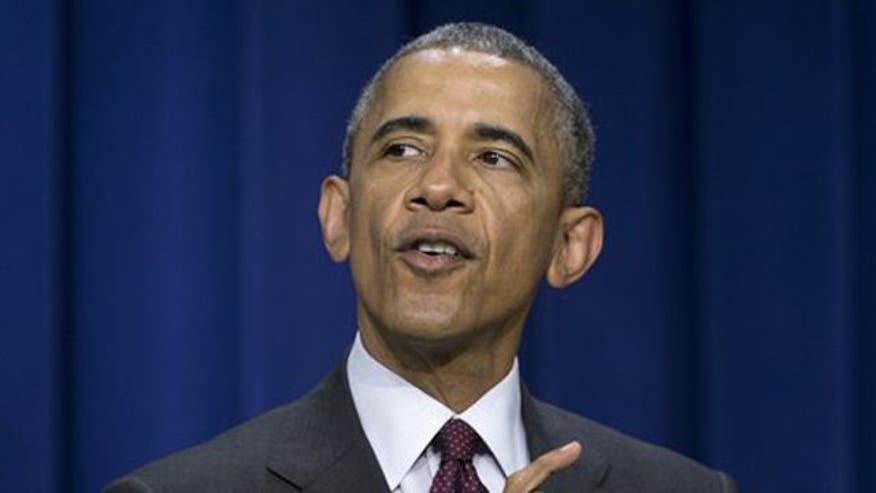 At a time when the U.S. military is facing threats on multiple fronts — most immediately, the advances of the Islamic State in Syria and Iraq, where the terror group recently seized Ramadi — President Obama told U.S. Coast Guard Academy graduates that climate change needs to be added to that list of threats.

“This is not just a problem for countries on the coast or for certain regions of the world. Climate change will impact every country on the planet. No nation is immune,” the president said. “So I am here today to say that climate change constitutes a serious threat to global security, an immediate risk to our national security, and, make no mistake, it will impact how our military defends our country. And so we need to act — and we need to act now.”

The president delivered the message at the Coast Guard Academy in New London, Conn.

He even couched it as a family matter, linking it to the worry he felt when one of his daughters had an asthma attack as a preschooler.

His speech to the cadets, by contrast, focused on what the Obama administration says are immediate risks to national security, including contributing to more natural disasters that result in humanitarian crises and potential new flows of refugees. Further, the president said he sees climate change aggravating poverty and social tensions that can fuel instability and foster terrorist activity and other violence.

Obama said the cadets would be part of the first generation of officers to begin their service in a world where it is increasingly clear that “climate change will shape how every one of our services plan, operate, train, equip and protect their infrastructure.”

As for the impact in the U.S., Obama pointed to streets in Miami and Charleston, S.C., that flood at high tide and to military bases around the country already feeling negative effects.

“Around Norfolk, high tides and storms increasingly flood parts of our Navy base and an air base,” Obama said of military facilities in Virginia. “In Alaska, thawing permafrost is damaging military facilities. Out West, deeper droughts and longer wildfires could threaten training areas our troops depend on.”